In April 2013, Christian Howes, Richard Galliano, and the Southern Exposure ensemble also performed for an unprecedented six nights at Lincoln Center in New York City. Their stint was picked up by the New York Times, Wall Street Journal, and many more prominent sources. You can watch one of the sets from Lincoln Center on Christian Howes’ YouTube channel here.

Southern Exposure, the latest album by jazz violinist Christian Howes featuring accordionist Richard Galliano, received praise in the latest issue of Downbeat Magazine, which is on newsstands now. Below is a transcript of the original article. (http://www.downbeat.com/digitaledition/2013/DB201303/single_page_view/71.html)

“The first jaw-dropping moment on violinst Christian Howes’ homage to the music of Latin America and Spain comes early, as the rhythm section kicks into the sunne opening of Egberto Gismonti’s “Ta Boa, Santa?” before letting Howes shine. Putting himself out front with a pensively minor-tinged part featuring plenty of graceful vibrato on the end of long notes, the violinst sets the stage for a masterful journey.

“Howes interprets his material with such a nuanced attachment to its meaning that on tunes like Ivan Lins’ “Aparecida,” everything about the way he moves across each string seems to express another emotion. Edgy tracks like “Cubano Chant” and accordionist Richard Galliano’s dramatic
“Spleen” keep things just cerebral enough. “Oblivion” features the album’s quintessential confluence of performers and composer. Penned by Astor Piazzolla, the lament follows an almost filmic trajectory, with narrative twists and turns that make a gorgeeous match for the classically trained Howes. What at first sounds like Howes and Galliano trading fours instead becomes a melding of virtuosic voices, with the energy and artistry of one audibly inspiring that of the other.”

Here’s what others are saying about Southern Exposure:

“While Howes and Galliano have featured billing, Nelson’s contributions and solos are critical to the overall success of the album…”

“Galliano and Howes make a convincing case that has evolved to the point where the terms “jazz” and “world music” have practically become interchangeable.”

“ Mr. Howes deserves credit for being able to keep up with Mr. Galliano and complement him perfectly…”

“…The triumph of “Southern Exposure”… shows that both accordion and violin are poised to play key roles in contemporary world jazz.”

“The whole album swims in a favorable climate of lyricism with flights of accordion crisscrossing those of the violin in rivalry with each other, in perfectly mastered dizzying arabesques, which are evidently the summit of the art.”

“Desiring to pay tribute to the music of Brazil, Argentina, et al., is admirable, but giving it authenticity and a personal stamp takes skill and insight.”

“…music inspired by a wealth of South American traditions.”

“Howes’s… solo violin pieces were quite fascinating, as he brought loops and jazzy sensibilities to bear on both the blues and Bach.” Streamline your practice: how to intelligently structure your practice to gain missing musical skills and become a more versatile, creative, confident musician 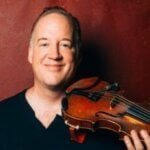